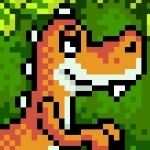 You're a dinosaur that rides a bicycle. Collect steaks to feed your family. Grab power-up items, and go as far as possible to beat the highest score.Beware of obstacles, and... Angry kitties! Chiptunes by Laffe The Fox. Play Bikosaur online at friv2012.com. You can play it in fullscreen to have fun with it. Bikosaur is a great Friv 2012 game to play with no cost.

Use Arrow Up button to Jump (twice for doublejump), Use Arrow Right button to Speed up,