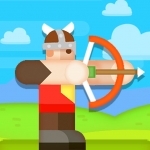 Try to drop your opponent from the platform su002Fhe stands with the Viking characters who fight on different platforms. For this, you should use your arrow or sword. Sword comes as default in the beginning of the game besides of that you can take arrow gun as bonus weapon. The one who drops hisu002Fher opponent for five times wins the game. The characters are able to do double jumps in the game. To be able to reach the high platforms, don’t forget to hit jump key twice. Here you can play Viking Wars 3 game and watch its walkthrough for free in friv2012.com. Viking Wars 3 is an amazing game from our list of Friv 2012 games.